I am an Interfaith Minister, ordained by the New Seminary of New York City, with a B.A. in Psychology. I have lived in Big Sur since 1977, and began performing weddings in 1994. I am inspired by and have studied with many wonderful teachers of the world’s religions and the wisdom paths of indigenous and earth based cultures. I was raised in the Christian faith, have been a Buddhist since 1979, studied and experienced shamanism in the US and Peru, and have visited temples, houses of worship, churches and mosques around the world.

I have performed weddings with Christian prayers and readings including Dearly Beloved, the Church of England, Baptist, Catholic, and Episcopalian scripts. I have created ceremonies with elements from Judaism, Hinduism, Sufism, and Buddhism, including Zen, Insight, and Vajrayana. I’ve integrated vows, poems, readings and rituals from Baha’i, Taoism, Druidism, and Old Celtic handfasting. I’ve integrated cultural symbols from China, Japan, Spain, and the Philippines. I can passably read a Spanish script and have respectfully sung Native American chants. I’ve officiated at an early morning wedding for surfers and at a romantic midnight marriage in the woods. I believe my joyous curiosity for these cultures and wisdom paths, as well as my neutrality, enhances a sense of acceptance when performing ceremonies.

As someone who is performing an interfaith wedding, or a wedding of a particular faith, I feel it is very important that I am careful to respect the tradition which I am representing, and to know as much as possible about the correct ways to carry out the traditions, rituals, verbiage and customs as a clergy person.

I began leading rituals and ceremonies in 1981 when, as a student teacher, I introduced the first class on Women’s Spirituality at Sonoma State University. I believe the rituals of the world religions were created originally for particular occasions, and we have the same authority to fashion individual and unique rites of our own. It seems to me we are in a time when many people are defining themselves as spiritual but not religious, with a desire for ceremony with a meaning that is authentic and specific to their situation. 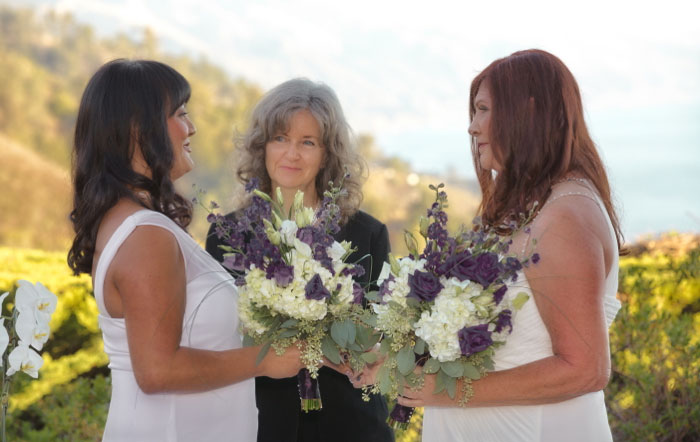 We had a short glorious summer of gay weddings in 2008, and were shocked when the law was changed. Now that marriage equality is back in California, while it has become more ordinary, because we lost it once, having the right marry the one you love is still very precious and deeply appreciated.

Currently I am the resident wedding celebrant for Post Ranch Inn, a small luxury hotel in Big Sur. I also perform ceremonies at other hotels, private wedding sites, parks and beaches in Big Sur and the Monterey area. I have great respect for the energy that motivates people to have a ceremony. I find the time spent creating, leading and sharing these genuinely meaningful occasions to be inspiring and deeply satisfying.